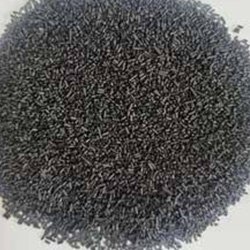 Metal impregnated activated carbon has improved physical and chemical adsorption capacity and is widely used in military and industrial protection fields, such as for CBRN, ABEK filters, and other respiratory protection devices. It is a catalytic adsorbent with metal on its surface through processes including solution impregnation, drying, and calcination.

The following tables list the MIL-DTL-32101 requirements for the properties and content of impregnants of ASZM-TEDA carbon.

Although the metal content of the impregnated carbon can be obtained by test analysis, its chemical state and structure are still unclear. It is generally believed that the impregnation solution for preparing ASC carbon can be composed of diamminecopper(II) carbonate (Cu(NH3)2CO3), ammonium chromate(IV) ((NH4)2CrO4), and diamminesilver(I) nitrate (Ag(NH3)2NO3). Ammonia and ammonium carbonate in the formula are used to improve metal solubility. During the impregnation process, the metal components also have new binding forms, such as Cu(NH3)2CrO4, CuCrO4, CuCrO4·3NH3. The metal precursors on the carbon surface are considered to be represented by CuCO3·Cu(OH)2, and CuCr2O7·2H2O. The impregnated activated carbon should be calcined in an air atmosphere at 170-175 °C, and the metal ammine complexes and inorganic salts impregnated on the surface of the carbon are calcined to form more stable oxides, including CuCrO4·2CuO, CrO3, Cr2O3, CuO, Cu2O, Ag2O, which become the adsorption active centers of the impregnated carbon. And the oxidation state of Cu2+, Cr(VI), and Ag+ is recognized as the active metal state of adsorption and catalysis.

The preparation method of ASZM carbon is basically the same as that of ASC carbon, except that the ammonium carbonate solution is replaced by ammonium molybdate and basic zinc carbonate solution. And the impregnated metal components are calcined to form Cu2+, Mo6+, Zn2+, and Ag+ in oxidation states.

Compared with other adsorption media or carriers, the impregnated activated carbon not only has the chemical adsorption and catalytic hydrolysis ability for chemical warfare agents, but also retains the physical adsorption ability of its micropores. The three abilities realize its broad-spectrum protection properties.

The protection from toxic gases with low boiling point, high volatility, or small molecular weight, such as hydrogen cyanide (HCN), cyanogen chloride (CNCl), phosgene (COCl2), mainly depends on the chemical adsorption or reaction of metal oxides impregnated on the activated carbon surface; For chemical warfare agents with high boiling point (Most of them are liquid at the room temperature.), it mainly depends on the physical adsorption capacity of activated carbon micropores. And some of the adsorbed agents will also form small molecular degradation products on the surface through catalytic hydrolysis. For example, thiodiglycol and hydrofluoric acid are the hydrolysis products of sulfur mustard (HD) and sarin (GB) respectively. The products will be either adsorbed by the activated carbon, or neutralized by metal oxides or basic substances on the carbon surface.

Removal of HMF in High-Fructose Corn Syrup by Activated Carbon